Rainbows Across Borders now has its own choir, Rainbow Singers Across Borders. They sang in public for the first time in Croydon Minster on Sunday the 6th of October, and again at Croydon Unitarian Church on the 20th.

On the 18th of May, Rainbows Across Borders took part in an event in the centre of Croydon to mark IDAHO, the International Day Against Homophobia and Transphobia. There’s more about this on the LGBT Croydon page. www.lgbt-croydon.org.uk/idaho-2013.

On the 29th of June, Rainbows Across Borders marched with their new banner and t-shirts in the London Pride Parade, and on the 23rd of July they protested at the Cameroon High Commission over the murder of Eric Lembembe. See the photos on our Photo Gallery page.

Rainbows Across Borders has been supported by CHE (the Campaign for Homosexual Equality), the Pink Triangle Trust and the Co-operative Membership Community Fund. 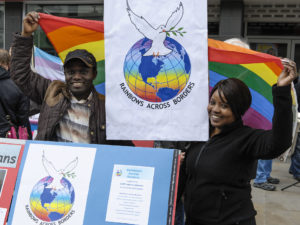